CW: Islamophobia, references to racism, sexism, xenophobia, sexual violence. We encourage you to prioritize your mental and emotional wellbeing as you choose how you want to engage with this statement.

To the McGill Community,

It is no secret that, like many other academic institutions,  McGill University was built on a history of oppression, its existence made possible by profiting off of the labour of enslaved and marginalized peoples. This regrettable history not only tarnishes the University’s past but also continues to influence how the University operates today. Scholars have abused their right of free speech and academic freedom to defend acts of rhetorical violence against marginalized communities on campus, shielding racist, sexist, and transphobic speech behind the term “controversy.”

Freedom of expression is traditionally considered central to permitting the free exchange of ideas and debate and fostering the university environment. Free speech, however, does not exist outside of its social context. David Gillborn, a critical race theorist at the University of Birmingham, suggests that the terms of what is considered ‘legitimate’ speech are dictated by whiteness, since “[w]hiteness operates to invest speech with different degrees of legitimacy, such that already debunked racist beliefs can enjoy repeated public airings where they are lauded as scientific and rational by many White [sic] listeners, who simultaneously define as irrational, emotional, or exaggerated the opposing views of people of colour.” Moreover, evidence from psychology, social work, and medicine suggest that microaggressions, including racist, sexist, homophobic, or transphobic speech, have numerous and significant impacts on the health, wellbeing, and educational success of marginalized people.

The defence of discriminatory dialogue at the expense of the safety, security, and wellbeing of people of colour reflects the power of whiteness in determining what is and is not considered acceptable speech. Upholding free speech at the cost of marginalized groups permits racist talk with real-world impacts; it teaches future generations that perpetrating this kind of harm is acceptable. These harms are not hypothetical; they have been and will continue to be felt by marginalized communities on campuses across the country.

In a recent controversy at the University of Ottawa, a fellow U15 university, a professor used a racial slur during a lecture. While students described the use of slurs as alienating and isolating, 34 current and retired University of Ottawa professors penned a letter claiming the use of slurs constituted a  matter of academic freedom. This letter was joined by a second, signed by over 500 Quebec professors, including three from McGill. On October 26, 2020, Principal and Vice-Chancellor Suzanne Fortier shared a message with McGill students and staff on academic freedom and inclusiveness. In this message, Principal Fortier recognizes the tension between academic freedom and inclusivity.

The manner in which academic freedom was invoked in the recent controversy at the University of Ottawa conflated the utterance of a racial slur with the teaching of material featuring racial slurs, which should only be allowed after robust equity training, serious consideration, and the input of students from the directly affected group. This harmful conflation, which was used to defend academics’ use of racial slurs, was perpetuated by Principal Fortier in her message.

While material featuring harmful language can be used prudently, the use of bigoted material, whether ableist, transphobic, racist, or otherwise discriminatory, is unacceptable, and McGill University has made no effort to resolve this tension. The University’s Statement of Academic Freedom defines no limitations for academic freedom, failing to address the responsibility of professors to use their freedoms responsibly. Equity and academic freedom need to be addressed as intertwined issues and McGill University falls short in this regard.

Peer institutions like the University of British Columbia and Western University clarify boundaries for the academic freedom afforded to their scholars. At UBC, academics are responsible for familiarizing themselves with accepted scholarly standards and following them honestly, openly, fairly, and accountably. Faculty members at Western have the responsibility to make a balanced presentation of controversial issues and may not use their classrooms as a forum for advancing their personal opinions.

While peer institutions prioritize respect and inclusivity, McGill University consistently prioritizes the protection of an extreme version of academic freedom over the safety and wellbeing of its students, regardless of claims like those in the Principal’s message that they support an environment of mutual respect. While the University has policies dedicated to the maintenance of respect, like the Policy on Harassment and Discrimination Prohibited by Law, none can “abridge academic freedom in the University’s educational mission.” Even the Charter of Students’ Rights, the one document dedicated entirely to the protection of students, comes with the caveat that it can not be applied in such a way that it restricts academic freedom. So, while the Charter provides that “students have a right to be free from vexatious conduct,” the University continues to allow professors to operate in a grey area where academic freedom and inclusivity are both encouraged, but only academic freedom is truly protected.

When the voices of students are sidelined and disregarded, the solution is not and cannot be active listening and dialogue, as the Principal argued. While inclusiveness and academic freedom are both invaluable principles, they cannot always coexist. Thus, when the University refuses to define limitations to academic freedom, the safety and wellbeing of marginalized students become inherently secondary. This is best exemplified by the University’s decision to first underline their respect for “free speech” when bigoted dialogues do make their way onto campus. The message McGill sends is all too clear; when equity and academic freedom come into conflict, they are more than ready to “abandon one principle in favour of another.”

In the past year, several articles have been posted on public forums by Professor Philip Carl Salzman, a retired Professor Emeritus of the McGill Anthropology Department. In one recent example, Salzman goes on to write that “the Middle East is a place where doing harm and being cruel to others is regarded as a virtue and a duty.” Salzman goes on to condemn multiculturalism, immigration, gender parity, cultural equality, social justice, and the Black Lives Matter movement, along with dismissing the existence of rape culture and systemic racism.

Despite their editorial nature, Salzman’s opinions are presented as though they are objective facts. Meanwhile, his affiliation with McGill lends him credibility that would not otherwise be afforded if not for his status as a Professor Emeritus of a respected institution such as McGill University. In providing such commentary while presenting himself as an affiliate of this University, Salzman’s recent publications in public fora demonstrate a lack of consideration for his responsibility as an academic.

Framing this as an issue of Professor Salzman’s academic freedom, rather than the right of Muslims and People of Colour have to feel safe, illustrates the ways in which McGill maintains structures that protect and legitimize racist and Islamophobic dialogues. Academic Freedom at McGill cannot be used to shield those who abuse their status and privilege as academics. If McGill wants to remain “steadfast and unequivocal in its commitment to a working and learning environment in which every member feels included, valued, and respected,” it must hold those who misuse their academic freedoms accountable, and maintain a standard of intellectual exchange where such issues are approached respectfully and with humility.

For these reasons, we, the undersigned, demand the removal of Professor Philip Carl Salzman’s Emeritus status. To ensure lasting change we, furthermore, demand an immediate, transparent, and student-centred overhaul of McGill’s Statement of Academic Freedom, enshrining the University’s commitment to inclusivity in teaching and research in policy. 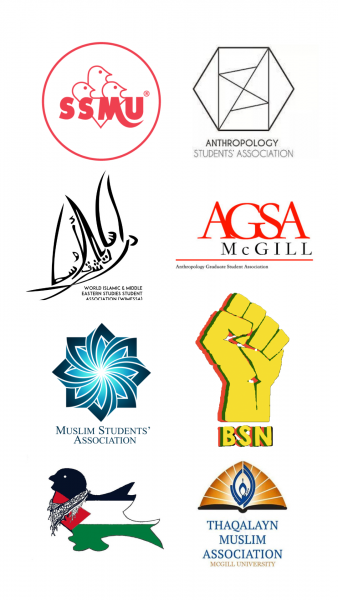 myWellness by Compass connects you to resources based on your unique needs, wants, and identities. It is a platform you can use personally when looking for support, or when you’re supporting friends who are navigating support. It was really created to simplify the process of finding the optimal support, at the right time 🙂 myWellness...

Welcome to SSMU’s Accessibility Week, taking place from Tuesday January 24th- Friday January 27th! ⁠ ⁠This week, we’ll be celebrating all things accessible, and taking a look into how accessibility factors into SSMU. We’ve got a whole range of events for you all, so there’s something for everyone. ⁠ ⁠Our events will be centred around...

The deadline to have your graduation photo included in your class mosaic 2022-2023 is April 21st, 2023. This is a hard deadline, and essential to provide the graduating community with digital and printed mosaics. -No exceptions- For exceptional cases, please get in touch with commsmanager@ssmu.ca as soon as possible. The photography team will do their...